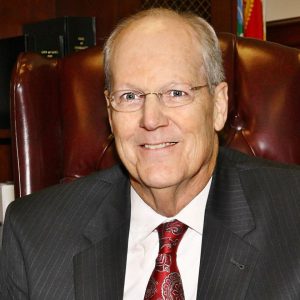 Judge Wesley R. Poole is a native and lifelong resident of Fernandina Beach, Nassau
County, Florida. He graduated from Fernandina Beach High School in 1967, received
his B.S. in Finance from Florida State University in 1971, and Juris Doctorate degree from the University of Florida in 1973. He was admitted to The Florida Bar on May
10, 1974. Judge Poole served as a Judge Advocate in the USAF from 1974-1978,
achieving the rank of Captain. He practiced law in Fernandina Beach from 1978-
2013, served as City Attorney for the City of Fernandina Beach from 1981-1991 and
1997 -2001, and maintained an A-V preeminent peer rating from Martindale-Hubble
(highest possible rating) for over 25 years. He was appointed by Gov. Rick Scott to
his current position as County Judge, Nassau County, effective April 15, 2013. He
presides over civil and criminal cases in County Court, as well as the Nassau County
Veterans Treatment Court.

His civic involvement has included, among other things,
Florida Community College of Jacksonville, Board of Trustees, (Chairman, 1995);
Gateway Girl Scout Council; Nassau Volunteer Center, Kiwanis Club; FBHS
Foundation; FBHS Business Partners; member and lecturer, St. Francis of Assisi
Catholic Mission Church. He is married to Debra Ann Guthrie (formerly of Enid,
OK), has two children, Paige Poole Poechmann and Harrison W. Poole, both of
whom are also graduates of Fernandina Beach High School, licensed attorneys and
members of the Florida Bar, and three grandchildren, all of whom live in Nassau
County, Florida.